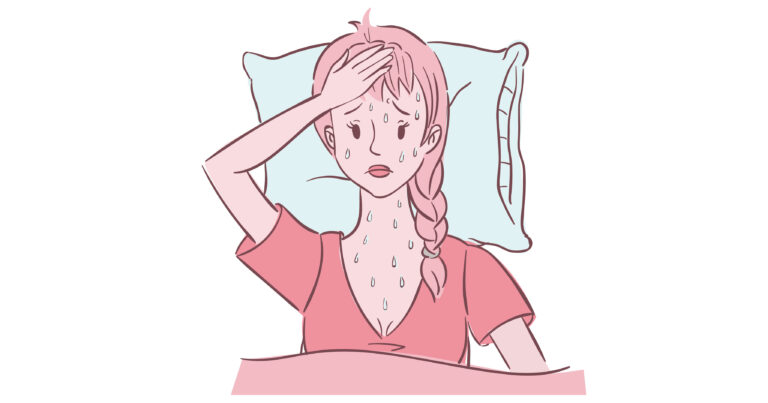 Most women have a story to tell when it is that time of the month. For some, the signifier that they are about to have their periods may be cravings for certain foods. There are those who end up with mood changes, (one minute you can’t wait to get to work, the next day, you just can’t stand your co-workers).

To some, the signifier can be some intense pain from the womb. However, to others, they not only have to endure the period week, but also the night sweats and hot flashes that come with it.

To get a clear understanding of the causal factors of sweats and hot flashes at night, we need to understand the menstrual cycle (the periods). The term menstrual cycle is a recurring process in a woman’s body. This process takes place in preparation for pregnancy. It normally involves the shedding of the uterine wall (period blood), the release of a fertile egg (ovum), the follicular phase, and the luteal phase.

The follicular phase takes place prior to ovulation. This phase is controlled by the estradiol hormone and entails the maturation of the follicles in the ovary. The phase starts on day one of your period and ends at ovulation. On the other hand, the luteal phase occurs after ovulation. Here, the hormone progesterone builds up thereby triggering the development of the uterine lining.

There is also the Follicle stimulating hormone (FSH) and the luteinizing hormone (LH) triggered by the pituitary gland.

On the other hand, estrogen and progesterone released in the womb inhibit LH and FSH, except during the time prior to ovulation (when FSH) is high. The level of estrogen increases as you progress towards ovulation. As a result, the estrogen triggers LH (the Luteinizing hormone surge), leading to the release of the fertile egg.

The rise in LH in the body correlates with the release of estradiol and progesterone. Body temperature is higher in the LH phase. Similarly, skin conductance may be higher at this phase leading to these two conditions.

Perimenopausal women are also likely to experience night sweats and hot flashes during periods. Perimenopause refers to the transitional phase prior to menopause. The duration of this phase may vary from 2 to 10 years. The median age of its onset is the early forties. However, the phase may occur as early as 35 or as late as 50. One of the symptoms of the perimenopausal phase is the onset of the climacteric symptoms (increased hot flashes and night sweats). These symptoms are as a result of changes in the endocrine system which in turn leads to a decline in estradiol. Estradiol is the predominant estrogen in a woman’s reproductive years. Usually, women have three types of estrogen, estrone (E1), estradiol (E2), and Estriol (E3). Hormone replacement therapy has been suggested as one of the ways of reversing the effects of the fluctuating hormones, which can also cause sleep disturbance in perimenopausal women.

Difference between night sweats and flashes during Period.

Hot flashes entail a sudden feeling of intense body heat that occurs during the day or night. They may result in a blush-like appearance that occurs either on your chest, face, or neck. On the other hand, night sweats entail intense sweating or hyperhidrosis that are associated with them. You may also experience cold chills immediately after the hot flashes. The night sweats can also be characterized by headaches, increased heart rate. You may experience either symptoms or just one of them.

If you experience hot flashes before your periods and you’re in your 20s, then there can be several factors triggering the symptoms. These factors include the use of certain medications, alcohol intake, and certain conditions such as endocrine disorder, cancer or cancer treatments, or hormone disorders.

It is normal for women to experience these two conditions before their monthly period. This is due to the hormone fluctuation as explained in this article. Before periods, the progesterone level declines. The low levels of progesterone disrupt the balance between estrogen and progesterone. As a result, you may experience night sweats and hot flashes before a period.  These two are also associated with women experiencing PMS (pre-menstrual syndrome), or its severe form, premenstrual dysphoric disorder (PMDD).

There are certain drugs you can take to deal with the hot flashes. These drugs include Paroxetine® (Paxil®). This anti-depressant, anti-anxiety medication has been proven to be effective when it comes to dealing with menopausal hot flashes. Hormone replacement therapy is another recommended approach for dealing with this problem.

The most important approach for dealing with night sweats and hot flashes is to develop helpful habits. First, try to find relief prior to sleeping time. You can do this by lowering the temperature in your room or turning on the fan. You can remove excessive beddings and also wear light clothing when you go to bed. Sipping cool water can also help with lowering your body temperature.

Strive to adopt a healthy lifestyle. You can do this by avoiding triggers such as smoking, including passive smoking, reduce alcohol and caffeine intake, avoid stress or learn how to control stress, avoid spicy foods, and avoid tight/restrictive clothing.