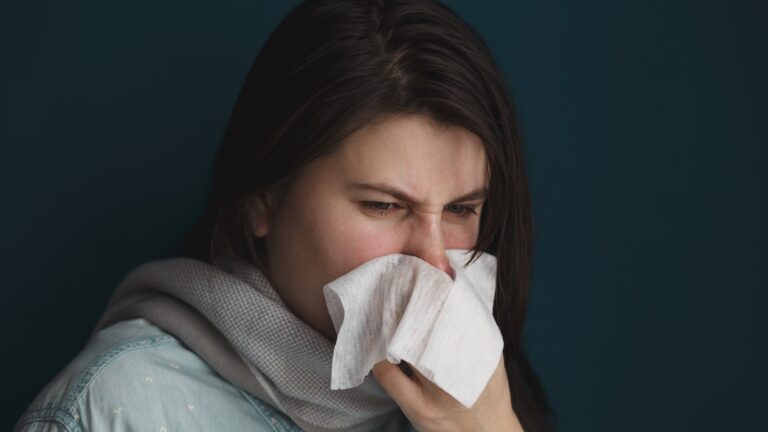 How to stop a runny nose fast, immediately or quickly

A runny nose may be caused by several factors including allergies, illnesses such as common cold and sinus infection, and irritation from dust, cold air, etc. Of these, common colds and allergies are the most common causes.

So, what will stop a runny nose fast? Well, your best bet would be to take some over the counter medications.

While none of these will heal common cold, or even shorten its cycle – viral infections have to take their full course – they will help to improve nasal discharge and other associated symptoms such as congestion, itchy eyes and nose, watery eyes, and fever.

Antihistamines help to relieve runny nose by blocking the action of histamines as part of the body’s natural allergic response. They are especially helpful for the runny nose that is accompanied by other symptoms of allergy such as watery eyes, red itchy eyes, and sneezing.

The major downside of first-generation (sedating) antihistamines such as Diphenhydramine (Benadryl) is their tendency to cause drowsiness (or sleepiness).

Second generation (no-sedating) antihistamines have however addressed that shortcoming. These range from Loratadine (Claritin) to Cetirizine (Zyrtec) and fexofenadine (Allegra) among others.

They are available in various forms such as Beclomethasone (Beconase), Fluticasone propionate (Flonase), and Fluticasone furoate (Veramyst).

In addition to steroid nasal sprays, oral steroids such as Methylprednisolone (Medrol) may also be used.

Decongestants on the other hand help to stop the nasal congestion that often accompanies runny nose, making breathing easier. They work by shrinking the inflamed blood vessels in the nasal passages.

In addition, they decrease the diameter of blood vessels on the sclera (white of the eye), consequently cutting down on any eye reddening.

Phenylephrine and Pseudoephedrine are the most common decongestant medications.

There are also combination drugs that contain both decongestants and antihistamines. Ask at your local drugstore (pharmacy).

How to stop a runny nose in class or at school

Medicine to stop a runny nose in kids

The runny nose is a common ailment among children. This is attributed to the fact that children have an immature immune system which is yet to build resistance to the more than 200 common cold viruses.

It is not surprising therefore that the question, “what stops a runny nose in kids?” pops very often in online platforms.

While cough and cold medicines are a classic and popular option for runny nose in kids and are widely available without prescriptions, WebMD says that they are not as effective in children.

You may, however, give over the counter pain relievers such as infant acetaminophen and infant ibuprofen to kids to stop discomfort and fever.

In addition, you will want to encourage your little one to take lots of fluids (or breastfeed) and administer steam treatment by taking the kid along with you to a hot shower for 10 minutes before bedtime.

Raising the head of your kid’s bed by sticking small blocks of wood (or book) under the legs also helps. OTC Saline nasal sprays and drops also help to improve runny nose in kids, but if you would rather make your own, you can do just that by mixing ½ tsp. salt with 1 cup of warm water.

While nasal decongestant sprays are used to treat runny nose caused by allergies, the University Of Maryland Medical Center advises against using them for children aged below 2 years. They should also not be used for more than 3 days.

While sage (taken as herbal tea) is a common home remedy for runny nose and sore throat in adults, it should not be given to children.

How to stop a runny nose without medicine or Natural Remedies

Moisturize the air: It also helps to run a room humidifier that creates a mist in your bedroom to improve the level of humidity.

You should, however, avoid having too much moisture as these can promote the growth of molds, a situation that could easily be counterproductive. Medline Plus also recommends cleaning the humidifier every day with household bleach or Lysol®

It would as well be helpful to add a few drops of essential oils (such as eucalyptus and peppermint oils) into the humidifier as The University of Maryland Medical Center says. These are especially effective in alleviating nasal congestion.

Garlic has antiseptic properties that makes it a strong remedy for runny nose. All you have to do is to add garlic into your dishes, including salads and soups.

You can as well boil a few cloves of garlic and drink a cup of the resulting solution, preferably after adding a sweetener. Some people also find it tolerable to take a piece of garlic every now and then.

From lemon to orange, lime and pineapple, sour fruits help to offer relief for runny nose and sneezing. Simply extract the juice of these fruits and take it several times daily.

Get some caraway seeds and inhale their smell. They have a mild cooling odor which helps to calm a runny nose. This happens because caraways seeds are a natural antihistamine. They curb the body’s histamine based inflammatory response to an allergen. The body still does its job, but not with too much external symptoms.

In fact, inhaling caraway seeds is yet another fantastic natural home remedy for runny nose.

Thyme has a similar effect to caraway seeds. To use this remedy, add a couple of tablespoons of dried thyme into a pot of boiling water. Next, inhale the vapors produced and you will notice a significant improvement in nasal discharge and associated symptoms.

Inhaling steam is known to help decongest the nose and promote the disappearance of runny nose and other associated symptoms. One option is to add some boiling water into a small basin and then inhale the vapor flowing out of it while draping yourself with a towel.

It also helps to add a few drops of eucalyptus, peppermint, or any other essential oil into the boiling water.

Alternatively, you can also spend 10 to 15 minutes in a hot shower. Concentrate on inhaling the fumes produced deeply.

Turmeric fumes help also help to combat runny nose and congestion thanks to its strong anti-inflammatory properties. A word of caution though: Turmeric should not be taken alongside milk as this can increase the production of phlegm.

You can either add a small amount of turmeric to food as you prepare it and inhale the fumes produced as food cooks, take ½ spoon of this yellow spice two times daily, or sprinkle it over burning charcoal or coal and then inhale the fumes coming out of it as it burns.

Rinsing your nasal passages with a saline solution helps to flush out mucus and alleviate a runny nose as well as other symptoms such as nasal congestion and sore throat.

You can always buy one the many over-the-counter saline nasal sprays or drops, or else make your own saline solution at home.

Simply add ½ teaspoon of salt in a cup of warm water, stir to dissolve all of it, and you are good to go. You can then pour the solution into an empty nasal spray or drops bottle, or just use your hands to administer the solution into your nostrils several times a day until the symptoms have improved.

The University of Maryland Medical Center proposes using a neti pot to irrigate the nose. A neti pot tool helps you to pour the saline solution into one nostril and then allowing it to flow out of the other one (while tilting your head sideways over a sink).

After blowing the solution (and mucus) remaining in the nostril, you then repeat with the second nostril.

You can buy one over-the-counter in most drugstores.

8. How to stop a runny nose at home with Honey

Honey is one of the most popular tricks for not only getting rid of a runny nose but also sore throat and cough. Here are a couple of tips on how to stop a runny nose at home with honey:

How to stop a runny nose from a cold

As for the question, “how do you stop a runny nose?” here are some of the best tricks that you may want to consider.

Drinking plenty of hot water and soups throughout the day is one of those easy but very powerful tricks to stop the runny nose from a cold.

The antiviral and anti-inflammatory properties of ginger make it one of the most wonderful home remedies for runny nose and other common cold symptoms.

One option is to make a paste from ground ginger, clove and salt and take ½ spoon twice every day, preferably in the morning and evening.

You can as well take a ginger tea prepared by boiling ginger in a pot of water before adding tea leaves and then allowing them some time to steep (3 to 5 minutes).

4. Get plenty of vitamin C

Increasing your intake of vitamin C helps to boost your immunity against common cold viruses. To do this, take lots of fruits such as citrus fruits (oranges, lemon, and lime), grapes, and amla, as well as vegetables such as spinach, kale, lettuce, etc.

As we conclude, what is the best way to stop a runny nose? Well, the best way is the prevention of exposure to the underlying causes.

While it is not much you can do to viral infections which are mostly airborne – save for keeping your hands clean by washing them regularly – you should be able to reduce your exposure to common allergens by flowing the few tips and tricks mentioned below: