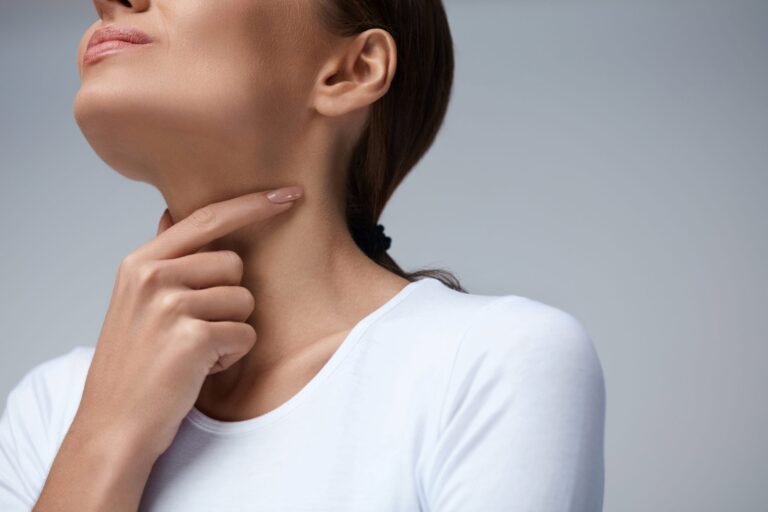 Lumps under the chin are simply bumps, a mass or a swollen region which occurs under the chin, normally along the jawline, on the front side of the neck. In some cases, the lumps may be more than one.

In minor cases swelling under the chin or getting lumps near the throat may result from a cold or a sore throat. However, in some cases developing lumps under the skin may be a result of more serious infections which may lead to enlargement of lymph nodes causing them to become hard/firm and tender.

Also, glands may become swollen after exposure to any form of trauma from cuts, bites or when a tumor or infection affects the mouth or neck.

Swollen glands and/or lumps on this area can result from illnesses, infections or other causes such as cancer, abscesses, benign tumors, and cysts. However, by comparison, lumps under the chin are hardly a result of serious underlying health problems such as cancer.

Causes of swelling or lumps under the chin

Swelling or lumps, whether on the sides of the neck, below the jawline or behind the ears result from numerous causes such as:

These are non-cancerous growths. sebaceous cysts -sacs filled with fluid (sebum) which result from abnormal cell division rate.  The area under the chin is very susceptible to getting cysts, which normally result from blocked skin-draining ducts.

The cysts can be soft or firm but hardly ever painful unless they become infected.

Benign tumors such as epidermoid also known as sebaceous, fibroma or  Lipoma: are non-cancerous growths that mostly develop as a result of the abnormal rate of cell division.

Cysts and benign tumors are hardly ever painful, however, could cause discomfort especially if it enlarges thus applying pressure to the surrounding organs.

Bacterial and viral infections can also trigger the formation of lumps on this part resulting in swollen lymph nodes.

lymph nodes are an important part of the immune system as they help protect the body from diseases. Lymph nodes are located in the neck-including the under the jaws and chin, underarms and in the groins.

It’s very familiar for lymph nodes to swell as an indicator of an underlying medical issue. The size of a swollen lymph node depends on the severity of the cause and it can be tender or swollen and painful.

Some of the underlying infections that could cause swelling or development of lumps under the chin include:

Lumps or swelling under the chin resulting from swollen lymph nodes caused by an infection usually go away without any medical intervention. However, your doctor may advise you to monitor the swelling.

Additionally, if you have lumps under the chin resulting from infections can be accompanied by symptoms such as fever, swelling of lymph nodes in the groins or underarms, signs of upper respiratory infection (a sore throat, cough or a runny nose), fatigue, and chills or night sweats.

Other conditions that could cause lymph nodes under the chin to swell include immune system disorders such as lupus,  rheumatoid arthritis, HIV, and tuberculosis.

Cancer also causes lumps; however, this is common in older people but can appear at any age. cancer is a malignant growth hence can easily metastasize and affect the lymph nodes, development of lymphoma, or cancer affecting other organs such as mouth, thyroid or throat or the salivary glands.

leukemia and Hodgkin’s disease can also cause swelling of the lymph nodes. Swelling, in this case, feels hard and can be painful or tender when touched.

Other Symptoms associated with cancer include:

Treatment involves seeking medical advice in order to determine the underlying cause. If the infection is due to an infection the doctor may put you on some prescription drugs such as antibiotics or antiviral medication.

Additionally, the doctor may suggest over the counter drugs such as ibuprofen to relieve the pain and inflammation.

In some cases, when the lymph nodes become infected, it may be drained off the pus.

In cases where they are a result of a cancerous tumor, there are a variety of treatment options such as chemotherapy, radiation or surgery to get rid of the lumps. However, the treatment method used will depend on factors such as health status, the type, and stage of cancer. A proper diagnosis by your doctor will help determine the proper treatment method for you.

When to call a doctor

If the lump or swelling under your chin gets worse and fails to go away after a maximum of two weeks or new symptoms develop or become more severe and habitual.