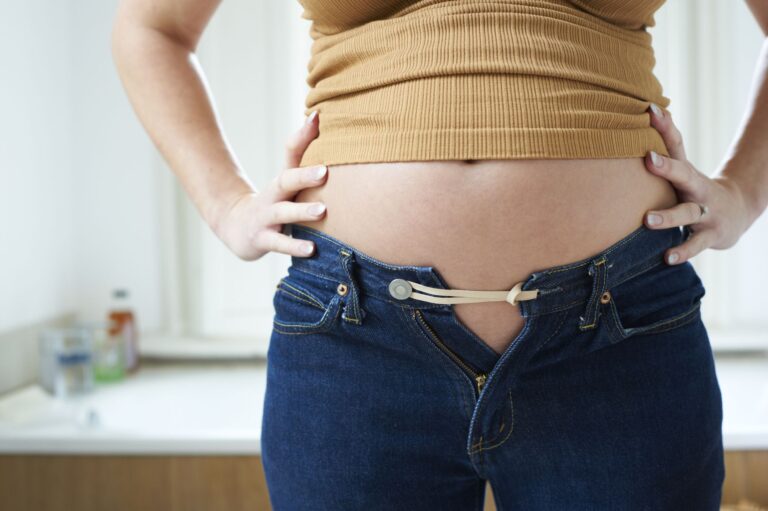 Period bloating is very common and can get depressingly uncomfortable. Unfortunately, most women are susceptible to feeling bloated from head to toe before and during their menses. Well, while you might be feeling like your whole body is swollen, the most common areas to swell are your face, breasts, feet, abdomen, legs, ankles and feet.

Bloating is simply an early sign of menstruation and with a few lifestyle changes here and there can easily be alleviated.

Premenstrual or menstrual bloating is usually experienced before the beginning of your periods. The symptoms usually begin 1-2 weeks before the start of menstruation.

Bloating can occur every month, once in a while or barely at all depending on the following reasons:

However, it can be accompanied by other Premenstrual symptoms such as:

According to the American Congress of Obstetricians and Gynecologists, about 85% of women experience PMS related symptoms.

Bloating before and during your periods is a result of changes in the levels of progesterone and estrogen hormones.

Almost a week prior to menstruation, changes in hormonal levels cause a decrease in progesterone which promotes the shedding off of the uterine lining thus causing you to start bleeding.

In addition to menstrual bleeding, research indicates that hormonal changes cause the body to retain increased amounts of water because of salt: causing cells to become swollen hence the feeling of being bloated.

According to a study in 2011, a lot of water is retained on the first day of menstruation which causes extreme bloating.

How to relieve bloating

Although there are no proven one-size-fits-all remedies, implementing some lifestyle changes can possibly be the only option.

Good news though, 2-3 days after your periods your hormones revert to normalcy which causes the bloating to subside. But in the meantime, you can try out some anti-bloating remedies:

Avoid eating large amounts of salt. Additionally, it’s important to avoid processed foods since they contain high amounts of salts and other unhealthy ingredients. Instead focus on consuming healthy foods such as fruits, vegetables, whole grains and lean proteins.

Sodium in salt increases the body’s water retention ability. According to American Heart Association, the recommended salt intake limit should be between 1500-2300 milligrams per day.

Drinking plenty of water on the days prior t your periods may help to enhance the body’s water retention ability by improving the functionality of a person’s kidney.

Despite the lack of evidence denoting that drinking more water alleviates bloating, it hydrates the body which improves how a person generally feels.

Some experts assert that alcohol and caffeine in some cases contribute to period bloating as well as other premenstrual symptoms.

However, if it’s impossible to skip your daily dose of a caffeinated drink, do it! but replace it with a decaffeinated type, tea, juice or water.

Go for potassium and protein-rich foods

Exercising regularly helps to alleviate symptoms associated with menstruation. Alternate between moderate to intense physical activities several times during the week. Additionally, you can include some physical exercises for muscle building several times a week depending on the choice of your fitness plan.

Stay away from refined carbs

Products such as processed sugar or white flour cause sudden increase in blood sugar levels which leads to a subsequent increase in insulin, causing the kidneys to retain an increased amount of sodium.

Refined carbohydrates lead to an increase in sodium levels which causes more retention of water which leads to bloating.

If natural relief methods don’t reduce bloating before and during your periods, consult your doctor for other treatment options such as:

Using birth control in some cases helps to reduce the accompanying symptoms of PMS and menstrual periods. However, you need to consult your doctor in order to get the best birth control method for you.

In extreme cases of bloating, your doctor may prescribe diuretic medication to boost the reduction of body fluids stored by increasing urine production.

When to see the doctor

Depending on the severity of bloating (mild or moderate) and the period of time it occurs (before your period and goes away immediately your menses start) there is no need to worry. However, if the bloating increases in severity to the point it inhibits you from functioning properly it is important to talk to your doctor.

Additionally, if it persists even after your period ends seek medical help. In severe or extreme cases prolonged bloating may be a symptom of a more serious underlying health condition, hence, it is advisable to seek medical help in order to get the proper diagnosis and the required treatment.