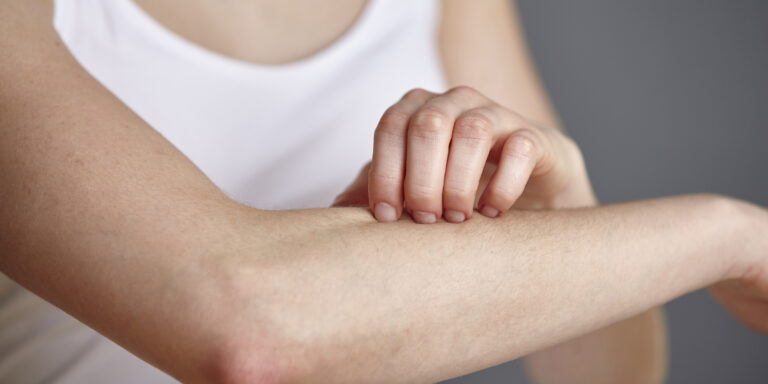 When do you have an arm rash? You get an arm rash if there is a change in texture, color or appearance in the skin on parts or whole of your arm skin. Rashes can be presented in varying ways such as raised patches, scaling formation of bumps. Your arm skin can also get damaged with cracks or develop a characteristic dry skin.

Read on to get information about the conditions or infections responsible for rashes on arms.

Eczema can encompass or cause inflammatory (dermatitis) or itchy skin rashes. Inflammation can result in long-term or chronic eczema with thickening of the skin, scaling, flaking, dryness or permanent color change likely to occur. Short-term effects to the skin include itching, redness with bumps or in absence of bump formation.

On the other hand, allergic contact dermatitis occurs in people who have an allergy to specific substances. The common allergen sources include poison ivy, oak, and sumac. Some people are allergic to chemical substances in hand lotions, building materials, hand gloves, etc.

The symptoms of eczema vary depending on factors such as types, patterns of symptoms, specific areas affected and whether the eczema types are short-term or long-term among other things.

This type of eczema normally occurs in adults. It is related to atopic eczema whose occurrence points out to the tendency in inheritance. Individuals with allergic asthma, hay fever, or food allergies are commonly affected by nummular eczema. Even though, dry skin, irritants and changes in temperature can contribute to its development.

It distinctly marked by coin-sized patches that cause skin irritation or inflammation (burning) though itching may be experienced sometimes. The skin surrounding the patches can be red or appear scaly.

Guidelines on self-care or treatment of eczema on your arms

Chronic eczema types are difficult to treat. However, there are a number of remedies to help control symptoms such as dry skin, scaling, and itching. While most eczemas result from inflammatory responses, dermatologists recommend prescription medicines to cool down.

If the symptoms include dry skin try to deep-moisturize the affected areas but avoid moisturizers with added fragrant. Go for pure Aloe Vera oils or coconut oil.

Unfortunately, there are no definite cures for eczema. Several treatment remedies that doctors combine cleverly with the aim of treating such conditions include preventing or controlling infection, addressing trigger factors and other related factors.

See your dermatologists help you figure out the possible triggers that you have not addressed.

Fifth disease or slapped cheeks is a viral infection caused by human parvovirus B19. It causes a bright red rash on cheeks but can spread to the chest, back, arm and legs. Other symptoms include fever, headache, stomach upsets. The virus is contagious at this time.

Like measles, the virus responsible for slapped cheek syndrome can be spread through contact and exposing a healthy individual to cough or sneeze with the virus.

The infection is common among underage children.

Common remedies include giving a lot of fluids to children and allowing enough rest without disruptions. See your doctor if you notice signs of fever in your child.

Scabies is caused by a mite infestation whose signs may take time to develop. The signs can show up on any part of the skin but the hands, arms, buttocks, penis and round nipples are loving areas for the itch mites.

The first sign of mite infestation is usually itching all over the skin. Itching intensity is almost intolerable at night. The scabies rash is characterized by hive-like bumps or tiny knots beneath the skin surface.

Individuals (children or adults) scratch in order to relieve itching. Continuous itching can result in sore on the skin.

Scabies can be treated well if the early symptoms are clearly marked or after an examination.

A deadly, feared-for and extremely contagious disease – measles. Babies, young people and adults can get measles. Fortunately, of late (as of early 2015) statistics reveal that no deaths from measles were reported.

This infection is caused by a paramyxovirus (virus). The main ways in which it spreads include contact with skin, sneezing or coughing droplets with the virus into the air. If you have not taken your child to get immunized, there are high chances of catching the virus once exposed.

Infection signs can take up to 10 days for children. More interestingly, someone with measles is contagious when he or she has the telltale rash has erupted.

Before the rash appears on the arms, your child will show symptoms such as fever, notable runny nose, cough and red eyes that look watery.

A red spot or bump rash will then develop inside cheek lining. Later on, an eruption will be seen on skin beginning from the facial areas to the neck region before spreading to the arms and legs. Usually, the typical rash is bumpy spots and could cause itching. At this point in time, symptoms like fever would go up.

How to deal with viral rashes such measles rash

The best way of approaching viral rashes is to inform your medic immediately you have carefully observed its symptoms or suspected it.

Medications are meant to control the symptoms as opposed to curing or treating measles. These include painkillers and medicines to get rid of itching in case it is experienced.

CAUTION: Do not give aspirin to anyone underage.

Acrodermatitis is a rare childhood skin condition. It can start as early as 1 month to 10, 12 or so years. Dermatologists don’t know the causes of acrodermatitis. However, the occurrence of the condition has been associated with viruses that cause infections in humans including Epstein-Barr and syncytial virus of the respiratory system.

How do you get hints or if your child is suffering from acrodermatitis? Red spots that cause itching usually start from the legs in a few days (4 days or so). As the eruption proceed s to the upper body areas (the buttocks, trunk, chest, arms, and face), the red spots begin to form purplish blisters that also itch.

This is one of the conditions responsible for skin rashes that itch and spread to the rest of the major body areas. If symptoms of acrodermatitis last for more than 4 months it can become chronic especially if it occurs after the first eruption has healed.

This condition does not require treatment if it progressively shows signs of improvement. This does not imply that you sit back and watch your child itch and suffer. Take your child to your doctor or get advice from a clinician.

If the above viruses lead to the condition, acrodermatitis may be infection-related. Creams or oral drugs may be prescribed by the doctor according to symptoms he/she observes.

Bites from small animals like insects can be the reason for small itchy bumps on the arms. Though common, insect bites cause a skin rash. Bites often leave your skin swollen or with redness. Some insects can cause an itchy rash of small red bumps.

On the other hand, a string such as wasps and bees can result in allergic reactions (some of which can potentially cause death). Individuals who are allergic to the substance injected into skin fall victims of bumpy skin rash.

Bites from insects can only be addressed well if the specific insects or animals are recognized or bites identified correctly. Therefore, antibiotics cannot help in treating rashes from insect bites.

Your physician will help you identify the bites or recommend a suitable method of overcoming rashes caused by stings.

Rash on arms only

Can you get a skin rash whose effects are seen on the arms only? It is quite possible to get a rash especially on the target areas like the elbows and wrists or forearms.

The possible causes of rashes on the arms only include insect bites, eczema which comprise allergic contact dermatitis, contact irritant dermatitis, drug reactions and hypersensitivity reactions are common.

If you have an eruption on one or both arms and do not understand, see an allergy specialist or doctor.

The following are common causes of itchy skin rash on the arms including the elbows.

Do you need a diagnosis for rashes on the arms? Certain diseases (viral, fungal or bacteria) can lead to rashes on your arms. Thus, tests are necessary. Sometimes and in many cases, your doctor will simply look at your arm skin and ask a few questions.

The cause of your arm rash will determine the course of treatment and period likely to take. Fortunately, some skin rashes heal on their own. Can home remedies help you out?

Avoiding allergies to contact dermatitis is obviously the best way and approach to skin rashes.

Cool-compress to calm down inflammation.

Try oatmeal rashes. If the symptoms are mild but have a widespread effect on the skin just soak your body in the tub with oatmeal. You can alternatively go for over the counter creams if the remedies cannot help.

Avoid tight clothing if the rashes cause itching. Sweat can also worsen the itching itself besides providing a favorable condition for infections.