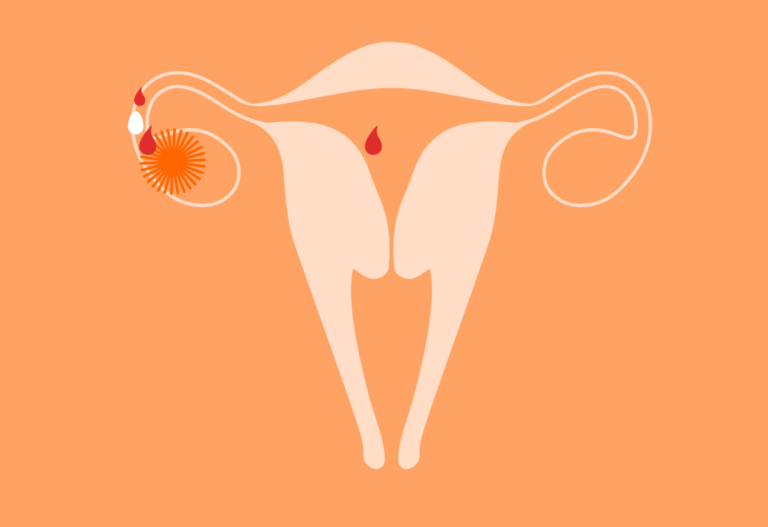 It’s that mid-cycle surprise that limits your “I can wear white pants” days to 1 ½ week out of a month, ruins your underwear, and bloodily interrupts your sex life.

You, like many women on the internet, have rushed to google for answers. As did we. We found a few questions that seem to capture the problem well, and we searched to find the best answers for you.

The first thing you need to know is that it’s completely normal. About 10%-30% of women encounter spot.  That doesn’t mean there aren’t possibly serious problems, there are. In fact, spotting happens for many reasons, ranging from perfectly normal to a bad situation, and it’s often difficult to correctly diagnose the cause.

Nonetheless, the best thing is to always check with your doctor if you are concerned. Hopefully, this guide makes it clearer when you should be concerned.

Ovulation occurs during your monthly cycle when a mature egg is released from the ovaries, then travels to the uterus, remaining there until it is time for fertilization. If the egg is unfertilized, then it is ejected from your body during your period.

What does spotting mean?

It means you are bleeding in between your monthly cycle. It is when you bleed sometime after your period but before the next one. A few drops of blood on your underwear (hopefully not your favorite) every now and again signals to spot.

If you experience spotting, the first thing to do is to check that you are bleeding from the vagina. Sounds absurd, but sometimes bleeding may come from your rectum or in your urine. To determine where the blood is coming from, insert a tampon as you usually would. If there is blood on it, then the bleeding is coming from your vagina.

If you feel something is wrong, please visit a medical professional.

Spotting happens either in the middle of your cycle or when ovulation is occurring. It is usually very light, with only a few drops or a small amount of blood is shed. it is so light in fact, that for most women, it doesn’t fill a panty liner.

It looks more pinkish or brownish. Dark red blood, however, may be a sign of menstruation. It could also signal pregnancy complications

When does spotting happen?

The normal menstrual cycle has a 28-day interval followed by 4-7 days of menstrual bleeding. However, that interval can range anywhere from 21 days to 35 days or depend on age 45 days.

Normal mid-cycle bleeding happens 10-16 days after the beginning of a woman’s last period.

How long does spotting last?

Bleeding during ovulation, am I pregnant?

It is normal for women to experience spotting in the first few months of pregnancy. This is usually due to hormonal changes. This may last up to a few weeks into the pregnancy.

It is important to consult your doctor to make sure the spotting is normal and not a sign of an ectopic pregnancy. If the blood is light or red-brown, then it is most likely normal. If it is heavier and darker, it may be a cause for concern. Here are other things to do with ovulation and pregnancy

In the first few weeks after giving birth or having an abortion, the uterus still has fetal tissue remains. This may be released as spotting in between your cycle. Take a look at this article by The Doe if you’re interested in a narrative that talks about the polemic topic of abortion and whether it should be legal.

Implantation spotting happens when a fertilized egg (embryo) attaches and implants itself in the uterine wall, which causes an eruption of small blood vessels, leading to this problem.

It may be different than menstrual in that is it darker in color, and there is usually cramp-like pain involved in implantation spotting. It occurs 5-10 days after conception. Though it has a low-risk level, there’s a chance for an ectopic pregnancy, where the embryo develops outside the uterus.

A miscarriage is the end of a pregnancy before the fetus is fully developed. An impending miscarriage comes with symptoms such as cramping, back and lower tummy pain and spotting. If the bleeding has clots or a different color, it may be a clearer sign that a miscarriage may happen.

With most women in the world opting to use contraceptives, it is normal to expect spotting which occurs anywhere from when you first start taking them, when you switch them off when you stop them entirely. These effects, however, last about 1-3 months. This is because contraceptives change the estrogen levels in your body, especially hormonal birth control.

Contraceptives come in many forms, the pill, IUD (intrauterine device), injections, and the progesterone rod. Progesterone treatments often result in this problem as they cause a drop-in hormone level.

The morning after pill, due to its high hormone levels can interrupt your menstrual cycle and cause light spotting. This is completely normal although it doesn’t always happen.

Ovulation spotting can be a result of a spike in estrogen levels at ovulation. When this surge suddenly drops, the endometrium is destabilized, and light bleeding occurs. It can also be that some hormones try to weaken the follicle surface, causing a small hole to be created to allow the egg to pass through. This may cause pain, cramps, and you be bleeding.

As women approach menopause, their bodies change, causing irregular hormonal levels. At menopause, bleeding stops. Perimenopause is simply the transitional stage, marked by irregular or heavier periods with spotting approximately a week before the menses are due to begin. Now, ovulation is mid-cycle and menstruation 2 weeks later.

Period blood is comprised of “old blood, endometrial line, and dead tissue.” When this is delayed, or only occurs partially, the flushing is incomplete leaving some debris behind, usually for up to a month, this expels in the form of spotting.

Thyroid problems can cause hormonal imbalances in women, such as an overproduction of estrogen, or metabolic imbalances. Seeing as spotting is often a result of such imbalances, they may be an indicator for thyroid problems.

Polycystic Ovary Syndrome: PCOS is a hormonal imbalance. It causes abnormal bleeding or spotting between periods and interferes with ovulation. This means that you’re the hormones in your pituitary glands are sending your ovaries the wrong message. Hormone therapy and birth control are used to treat PCOS.

Some drugs- especially those designed to prevent clotting- may cause spotting as they thin out the blood. These are known as anticoagulants.

Antipsychotic tranquilizers and antidepressants and corticosteroids are also known to cause spotting. Consult with your doctor in any such event

These are a wide variety and it is best to see your doctor about any concerns you may have. These medical conditions either cause it or have a symptom of them.

STD’s also cause spotting, with the biggest culprits being chlamydia and gonorrhea. Both have vaginal spotting as a symptom

If you have pelvic pain, incredibly painful periods along with spotting, contact your doctor.

Ovarian cyst: these are small sacs filled with fluid that develop in your ovaries. These may rupture, causing extreme pain, and spotting.