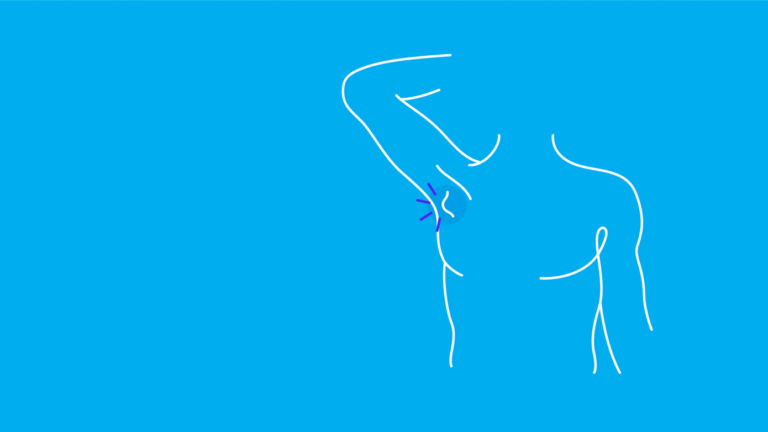 Do you have swollen armpits? The swollen armpit is a sign that your body is battling an infection or another type of illness. This is the place where some lymph nodes are located such that in case there is something wrong; expect to experience tenderness and pain in the lymph nodes.

Swollen lymph nodes can lead to breast pain during menstruation period and it is described to be one of the most common breast-related symptoms women experience.  Breast pain in women is also known as mastalgia in medicalese.

Lymph nodes can swell in response to changes in the breast. Women associate lymph node swellings are those suffering from cancer, however, the lymphatic system gets turned on whenever there is a hormonal change.

There is no research that brings out the major causes of swollen lymph nodes during the menstruation period but it seems if you experience this situation you have cyclical mastalgia. Have you ever been evaluated for fibrocystic breasts? There’s some evidence that fibrocystic breasts might be related to cyclic mastalgia.

Some studies find hormone deficiencies or excesses may play a role, including high levels of prolactin, a hormone associated with breastfeeding. Again, there is no link between breast cancer and cyclical mastalgia which is considered very tenuous.

The lymph nodes of the axilla (armpit), inguinal region (groin), and neck tend to enlarge more frequently than other areas. Localized lymphadenopathy, where the lymph nodes of a single area are affected, may also be accompanied by lymph node swelling elsewhere.

It is recommended to visit your health provider for further physical examination. Here are some of the ways to relieve the pain:

The swollen muscle under the armpit

The causes of swollen muscle resulting in pain under armpit include:

When the pectoralis muscle is pulled or strained due to intense exercise without warming up. A pulled muscle under the right armpit may cause pain, but this is not usually serious.

Waxing and shaving the underarm can cause sore armpits and sometimes you might experience swellings. It is advisable to take a painkiller and avoid touching it for a while until the skin heals.

Under the armpit, there are more hair follicles that are prone to infection. Inflammation of these hair follicles and surrounding sweat glands can occur when bacteria invade them. This can also occur when the pores are clogged by dead skin cells, bacteria and excess oil.

It can also result to formation of infected cysts and sinus tracts, which can cause pain, itching, pus formation and scarring.

This could result to swelling and pain but in most occasions breast cancer is painless. It can also come with other symptoms, including thicken tissues or lump in breasts, changes on size and shape of the breasts, dimpling on the skin of the breasts area, skin rashes around the nipples, discharge or blood-tinged discharge from the nipples, changes of the appearance of nipples, etc.

Your lymph nodes can swell up when infection invades your body, which may be caused by viruses, bacteria or parasites. Other conditions that can cause swelling of the lymph nodes leading to pain under right or left armpit include cancer and autoimmune disorders like rheumatoid arthritis.

If this condition remains untreated for long, expect to experience complications like nerve damage or peripheral neuropathy can occur. Pain under right armpit may occur when the armpit nerves are affected, causing sharp pains.

Cyclic breast pain or swelling is dull, heavy pain in the upper outer parts of breasts and sometimes, armpits or arms on one or both sides; it starts after ovulation and resolves with the onset of menstruation.

Secondly, swollen lymph nodes can be due to mastitis. Mastitis, which is a breast inflammation, can be caused by an infection during breastfeeding. Symptoms include red and swollen breasts on one or both sides and enlarged and painful lymph nodes in the armpit on the affected side.

Lymph nodes that are swollen due to infections tend to be firm and painful. Enlarged lymph nodes due to cancer are usually firm or hard in consistency, fixed, usually not painful, and maybe stuck to each other. Cysts and abscesses under the skin in the armpit may produce lumps that could be mistaken for enlarged lymph nodes.

The following some of the causes of enlarged axillary lymph nodes: