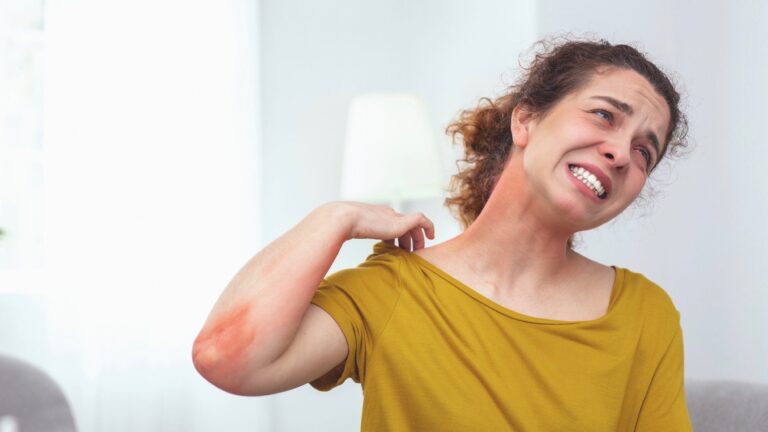 Sunburn itch is nobody’s idea of fun. But there are numerous options available to soothe it without worsening the itch or causing an infection all of which are highlighted in this guide.

The question often arises, does sunburn itch? Well, a sunburned skin can become itchy and give you a strong temptation to scratch it, only to realize that this causes more itching. The itching is often accompanied by skin peeling and may continue for several days.

Why Does Sunburn Itch or Why Do Sunburns Itch

The question, “Why does sunburn itch?” is a common concern in online skincare and health communities and there is a good reason for that; sunburn itch can really ruin your day. To understand why sunburns itch, it is important to, first of all, understand what causes sunburn in the first place.

Sunburn is usually the result of ultraviolet (UV) radiation damage to the skin. This happens when the degree of exposure to UV rays exceeds the ability of the body’s protective pigment, called melanin, to protect the skin.

In such a case, the UV radiation damages the skin cell’s DNA. In response, the immune system kills of the damaged cells, but because the UV radiation doesn’t penetrate as much as X-rays and other forms of radiation, the damage is in most cases confined to the surface layers of the skin.

The outermost layer of the skin usually has an abundance of special nerve fibers referred to as C-fibers. These are responsible for itching. Itching is a neurological mechanism through which the body is protected against insect bites and contacts and other minor injuries that are not significant enough to register as pain. It is like a kind of alarm.

Since sunburn commonly affects the surface layers of skin, the C-fiber nerves may fire furiously till the skin has healed from the sunburn.

As tempting as it is, scratching an itching skin only worsens it. So refrain from scratching the skin and instead focus on relieving the itch using the remedies highlighted in a subsequent section of this article.

A red or pink rash is one of the early and most common symptoms of sunburn. The red rash typically starts as a small patch or a mole-like spot and then begins spreading out to larger areas of skin, sometimes covering as large an area as the whole back.

In some cases, the rash may be accompanied by itching. This is part of the body’s natural response to stimuli and is meant to notify you that the skin has registered an injury. Itching sunburn rash responds well to treatment with calamine lotion, hydrocortisone cream, and cornstarch, not to forget baking soda and oatmeal baths.

We have covered these in more detail in another section of this article.

If you have severe sunburn itch, scratching the itching skin may explain why you are there. It is very tempting to scratch an itching skin but this only serves to worsen the itching.

Continued exposure to sunlight by not wearing sunscreen when going outdoors, even on cloudy days, may also be  a causative factor for a severe case of sunburn itching.

Try to keep your skin cool with cool compresses and apply oatmeal, baking soda, or turmeric paste for 15-20 minutes before rinsing your skin with cool water and follow it up with calamine or aloe vera lotion.

If that doesn’t help, get an over-the-counter 1% hydrocortisone cream.

Sunburn Itch Treatment or How to Treat Itchy Sunburn

Sunburn itch treatment rolls down to prevent further damage, keeping the skin cool and moisturized, and soothing the itching alongside other symptoms such as pain and inflammation. Here are numerous options that you may want to integrate into your treatment regime:

Topical steroid products such as 1% hydrocortisone creams can help to alleviate itching. Such products should however not be used in vaginal or rectal areas according to the WebMD website.

One great soothing lotion on the market that most skin experts recommend is Eucerin Calming Lotion. You can keep it in your fridge for thirty minutes for immediate cooling and soothing relief.

Caution: Never apply Vaseline or any other petroleum product on sunburned skin. Butters such as cocoa and shea butter also do sunburns no favor.

You should avoid sprays with Lidocaine or any other such numbing “caine” products as they often cause allergic reactions in some people. The last thing you want is to get allergic dermatitis on top of the already itching skin.

Baking soda is alkaline in nature and helps to restore skin pH which then alleviated skin itching.

Turmeric is as well beneficial to sunburn itching. To use this remedy, mix turmeric powder and water and stir thoroughly to make a fine paste. Next, apply the paste on the itching area of skin and leave it on for 10 minutes before washing it off with cold water.

This common ingredient that is probably already in your kitchen is a fantastic remedy for sunburn itching. If you like you can also use commercial colloidal oatmeal products such as Aveeno which are available in most local drugstores.

One option is to take an oatmeal bath prepared by adding a couple of cups of oatmeal powder to bathing water.

Alternatively, you can apply a paste of oatmeal prepared by mixing oatmeal powder, such as Aveeno, with some water and leave it on the skin for 15 minutes before washing it off with cool water.

Here is a third option you may want to consider: Wrap a cup of oatmeal powder in a cotton washcloth. Boil it for 5 minutes to soften it. Take a cool shower using the washcloth containing the oatmeal as the sponge, but without using soap.

Other tips to relieve sunburn itching:

For those of you asking what to put on itchy sunburn, your best bets are baking soda and oatmeal baths (or pastes). Soothing your skin with calamine lotion or turmeric is also quite as effective.

But if these home remedies don’t seem to be improving your condition, you should consider applying a 1% hydrocortisone cream. Such creams are sold over-the-counter. Just make sure to follow the instructions carefully.