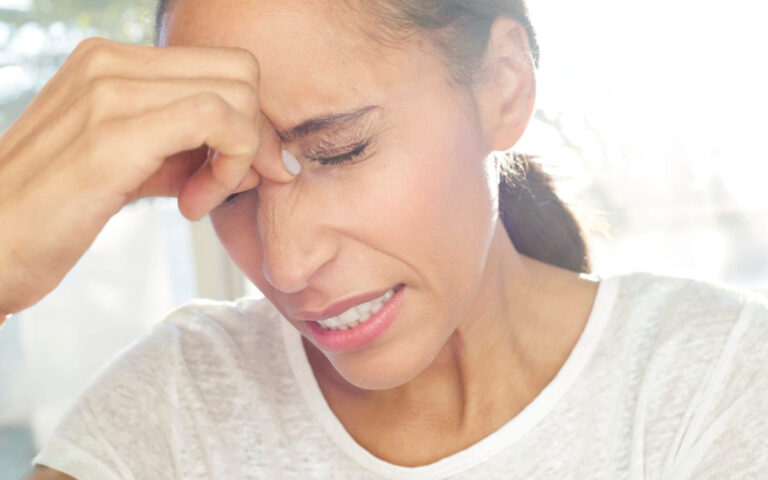 What are the best treatments for nose infection? What symptoms should you look out for to know if you are dealing with a case of nasal infection? Is fungal nose infection a cause for concern? You will find all this and more in just a moment.

Sinusitis (sinus infection) is the most common form of nose infection. This is characterized by swelling of the tissues lining the sinuses – air-filled cavities occurring behind the nose, on the cheeks, and in the forehead.

Sinusitis affects approximately 37 million people in America every year according to the WebMD website. Among the most common sinus infection symptoms are:

The following nose infection symptoms are specific to bacterial infection of the nostrils:

Staphylococcus bacteria are usually to blame for most cases of nose skin infection. These are beneficial bacteria that are found abundantly throughout the skin. In case of injuries and cuts on the skin, they can get into the body, resulting in an infection.

This may manifest itself as furuncles (boils) on the nose and sometimes in the nasal vestibule (the part just inside the opening of the nostril.

Nose cartilage infection is one of the most common complications of nose piercings. This is usually attributed to staphylococcus bacteria that are found in abundance all over the human skin.

According to The American Academy of Family Physicians’ treatment of an infected nose, cartilage involves using antibiotics that offer good coverage against Staphylococcus bacteria. Mupirocin is one such antibiotic.

You can always avoid nasal piercing infections by taking good aftercare measures as directed by your piercing specialist. You will at the very least want to keep the piercing clean by washing it with warm, salty water 3 times every day until it has healed.

Nose infection treatment or how to treat infected nose

The most appropriate nose infection treatment depends on the nature of the patient’s condition. Here is a breakdown of how to treat infected nose:

About two-thirds of sinusitis cases will go away in about two and a half weeks and don’t necessarily need the attention of a doctor. You may, however, want to take care of the symptoms and hasten the healing process using the following treatment options:

Taking over the counter painkillers helps to alleviate the pain and headache caused by a sinus infection as well as fever.

Among the most common pain relievers are:

NB: Do not give aspirin to children aged below 16 years. It can increase the risk for Reye’s syndrome which is rare but fatal. Ibuprofen on the other hand should not be used by people with asthma, stomach ulcers, and heart conditions.

Usually sold OTC in most drugstores, nasal decongestant medication can also help to unblock your nose and enhance your breathing. They should however not be used for more than a few days as this may end up worsening rather than improving the condition.

4. When to see your doctor

You should seek medical attention if sinusitis lasts more than a couple weeks or doesn’t seem to improve – or even worsens – after a week of treatment with the options listed above.

Your doctor may recommend one of the following treatment measures:

Antibiotics: A course of antibiotics may be prescribed for a case of severe sinus infection, especially if no improvement has been noted in a week or so. This helps to treat any bacterial infection that could be responsible or have resulted from the sinusitis.

Steroid drops can help to lessen the inflammation (swelling) in the sinuses.

Surgery is used as the last resort for persistent sinusitis. Functional Endoscopic Sinus Surgery is preferred for the treatment of sinus infection. It involves inserting an endoscope into your nose – usually under general anesthesia, although it can as well be done under local anesthesia – to allow the surgeon access to your sinuses.

The surgeon then removes any issues that could be causing the inflammation and blockage of the sinuses e.g. nasal polyps, and then inflate a small balloon to open up the sinus drainage. A self-dissolving implant may as well be used for the purpose.

There has been a notable increase in reported cases of fungal infection in the nose, or fungal sinusitis, over the last three decades according to The American Academy of Otolaryngology-Head and Neck Surgery.

This is attributed to three main factors, namely heightened public awareness, use of immunosuppressive therapies e.g. cyclosporine medications that are used to “fool” the immune system in order to stop organ rejection, and excessive use of antibiotics.

With a suppressed immune system, fungi kick into action and invade the body, resulting in numerous side effects. The damp cavities in the sinuses are ideal for fungal activity and because fungi require no light in order to breakdown food substances, they thrive very well in there, causing fungal sinusitis.

According to the American Academy of Otolaryngology-Head and Neck surgery, there are four main types of fungal sinusitis and treatment varies from one to the other as follows:

This type of fungal infection in the nose so to speak produces fungal pore clumps, called “fungal balls”, within the sinus cavities.  It often causes injury to the sinuses, resulting in discomfort.

This is an allergic reaction to fungi floating in the air. This type of fungal sinusitis tends to affect immunocompetent people (possessing normal immune response) with a history of allergic rhinitis.

The condition results in huge fungal debris and mucin (a substance featuring carbohydrate-rich glycoproteins) within the sinus cavities and surgery is typically required to remove them. Medications may also be prescribed to prevent the recurrence of this condition.

This type of fungal sinusitis is common in Sudan and northern India and affects people with no identifiable immune deficiency, progressing gradually over months or even years.

Symptoms for this condition include facial swelling – often resulting in impaired vision – and chronic headache. Chronic indolent sinusitis is distinguishable for nodular shaped lesions that are only visible when examined under a microscope.

This form of sinusitis affects people with compromised immune systems. It typically invades the sinuses leading to continued destruction and often reaches the bony cavities that house the eyeball and brain. Aggressive surgical procedures and anti-fungal therapy (intravenous) are used to treat the condition.

Fungal nose infection is a rather rare occurrence as The Health Line website notes; bacterial and viral infections are more common.