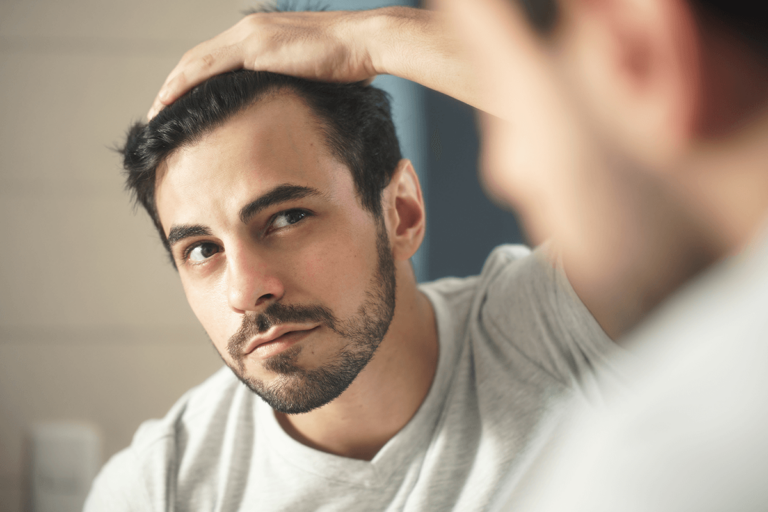 What is the meaning of receding hairline?

Receding hairline refers to the continuous loss of hair mainly experienced by men and some women where your hairline will begin to thin commonly on either side of your forehead before you get a bald patch on top of your head.

These are usually signs of hair loss. They include:

It usually forms a letter M shape such that the middle and side remain while you lose lateral hairs on your forehead. This is the initial stage of receding hairline. With time, you will start having hair fall on top of your head although this will have depended on the causes of a receded hairline.

It forms this shape where your scalp center remains bear with only hair on the back or even sides of your head. You will, therefore, realize unique and great temples when your hairline is receding.

This is usually considered as the major common cause of receding hairline. The National Institutes of Health explains that people experience receding hair as they grow older, so it isn’t uncommon to see a recession along the hairline as you advance in years.

It is some inherited genes from your mother or father that cause the hairline to fall off. The American hair loss association claims that most hair loss in men is associated with a genetic predisposition.

The follicles on the scalp, especially those that appear along the lateral sides of the front part of the head, are genetically sensitive to dihydrotestosterone (DHT). DHT can cause the hair to recede. Without this genetic trait, you most likely won’t suffer from a receding hairline until you get older.

Testosterone exposed to type II 5alpha-reductase converts into dihydrotestosterone, according to the American Hair Loss Association. When this meets hair follicles, it affects the growth of the hair, producing finer hairs than normal and it causes hair fall.

This is a thyroid pill given to people who suffer from the thyroid problem, in turn, causing hair loss and receding hairline when dealing with hypothyroidism.

Some foods we use are known to speed up receding of the hairline. Avoid eating refined foods (grains and sugar) as it worsens hair loss. Furthermore, some researchers have found a correlation between heavy smoking and a receding hairline.

Chemotherapy and some medicine

Some of the drugs that can accelerate hair loss and recede of your hairline include medications rich in Vitamin A, those that are used in the diagnosis of heart disease, blood pressure, cholesterol, gout, and anti-depressants.

For cancer patients, chemotherapy is known to cause temporary hair loss and this can worsen your recessing hairline.

Those men who have bald patterns usually experience receding of hair although this baldness is due to some genetic predisposition from the parents.

Research shows that people who live under prolonged stress end up having receding hairline due to hair scratching when things don’t work the way they want. Therefore, DHT is not the only cause of receding hairline and baldness.

Hair fall in teenagers can be influenced by various causes such as medical conditions, medications, poor nutrition and over styling. The receding hairline typical of male-pattern baldness is caused by hormones and heredity.

According to the Mayo Clinic, a history of pattern baldness on either side of the family increases the chances of having a receding hairline. According to Nemours Teens Health, male-pattern baldness can also be caused by taking steroids to build muscle.

Eating a healthful diet and being gentle with your hair during washing and styling may slow hair loss, but there is no proven way to prevent hair from receding.

Receding hairlines are a common problem for both men and women, with issues being more common in men. The following are ways on how you can regain your hairline:

Apply over-the-counter minoxidil to your scalp.

Minoxidil works as a vasodilator increasing blood flow to the scalp and is also believed to activate prostaglandin endoperoxide synthase-1, which can cause revitalize follicles and help regrow hair. It only works if you continue using the product indefinitely.

It is a medication that is specifically designed to treat a scalp condition known as psoriasis. According to the Mayo Clinic, it can take as many as 12 weeks of daily application to see hair growth results from the product.

It blocks testosterone from converting into dihydrotestosterone (DHT). DHT binds to the androgen receptors of the hair follicle, causing hair loss. Finasteride can be absorbed through the skin, potentially causing serious birth defects to a male fetus.

The following are ways to stop receding hairline:

Go for a healthy diet

Mayo Clinic encourages a nutritious and balanced diet to combat a receding hairline. Avoid foods that contain high in substances such as protein, minerals, carbohydrates, and fats, instead, consume vitamins that are essential for regeneration and overall well-being.

Avoid complicated or too much Hairstyling

Procerin can halt a receding hairline. Procerin works to preclude DHT generation, and it reactivates your hair follicles and allows growth.

This is the most cost-effective and attractive way to reestablish a receding hairline and combat frontal hair loss. The hair transplant procedure is conducted by using one-hair follicular unit hair grafts.